To add a Remembrance about a deceased member please contact us through the link above.  Obmissions have occured due to lack of saving obituaries, and from informtion being lost over time.

John Charles Looby, after a courageous battle with cancer, passed away surrounded by family
on November 1, 2022, Jack was born in Troy, New York, to Catherine (nee Purcell) and Robert
Gray Looby on December 7, 1959. He is the beloved husband of Joyce (nee Chapman) Looby
and devoted father of Rose Catherine Looby. He is survived by his sister M. Elizabeth (Douglas)
Williams and his brothers Peter R. (Deborah) Looby and William D. Looby and several nieces
and nephews.
As well as being a devoted husband, father, and brother, Jack took great joy in sharing dad
jokes and bad puns with his daughter. Jack was passionate about his Irish heritage, with a gift
for blarney. As an active member of the Ancient Order of Hibernians he served as an officer in
his division and at the county level and was a recipient of the Commodore Barry award. He was
an avid cyclist, often participating in the Great Ohio Bicycle Adventure taking great pleasure in
passing cyclists half his age on hills and proudly displaying the celtic tattoo on his right calf while
calling out "on your left!"
Helping others defined Jack's life and career. His great heart for humanity, in particular for those
who were disadvantaged, at risk or disabled. Jack was particularly dedicated to his work with
students at St. Rita's School for the deaf, initially volunteering while in high school, serving as a
residential advisor, and later educator. Even after leaving St. Rita's full-time, he remained
actively engaged as a volunteer. Jack's other jobs included working with at-risk youth, teaching
with Catholic Social Services, and working with the disabled most recently at Ohio Valley
Goodwill Industries. Jack was passionate about his work and believed that everyone should be
valued and treated with respect.
Jack graduated from Xavier University with a Bachelor's degree in History. He had a particular
interest in Civil War history and his own Irish-American history.
He was a member of the St Mary Catholic Church in Oxford, Ohio. Jack was an active proud
member of the Ancient Order of Hibernians for over 25 years. The brotherhood and friendship
with his fellow Hibernians was very special and rewarding in his life.
Jack's visitation will be held on Friday, November 4, 2022, from 5 to 8 pm at Paul R. Young
Funeral Home in Oxford, Ohio. Mass of Christian Burial will be held on Saturday, November 5,
2022, at St. Mary Church in Oxford, Ohio.
In lieu of flowers, please consider a donation in Jack's memory to St. Rita School for the Deaf.
To plant a beautiful memorial tree in memory of John C. "Jack" Looby, please visit our Tree Store.

Reverend Donald G. McCarthy passed away on Friday, January 5, 2018. He was born on December 20, 1929 in Cincinnati, Ohio. He did his preparatory studies at St. Gregory Seminary and studied theology at Mount St. Mary’s Seminary of the West, Norwood. He was ordained on August 22, 1954, after his third year of theology, at Mt. St. Mary of the West Seminary Chapel, Norwood by Archbishop Karl J. Alter. He returned to the Seminary after ordination for his final year of theology.

Father McCarthy received his first assignment on June 16, 1955 as Assistant at St. William Parish, Cincinnati and to teach at Elder High School, Cincinnati.

On June 14, 1957, he was appointed Assistant pro tem at St. Jerome, California (Cincinnati). That same year, he left to go for studies at Louvain University in Belgium; in 1960 he earned his PhD.

On August 19, 1960, he was appointed to the faculty of Mt. St. Mary’s Seminary as Instructor in Philosophy as well as a Chaplain of the Newman Club at the University of Cincinnati, where he remained Chaplain until 1969.

In June 1972, he went on Sabbatical leave for one year to pursue studies in Moral Theology.

On October 23, 1973, he was appointed Pro-Synodal Judge in the Tribunal of the Archdiocese of Cincinnati while continuing on faculty at Mt. St. Mary’s Seminary.

In August 1979, he was appointed Director of Education at Pope John XXIII Medical Moral Research Center, St. Louis, MO, while continuing as part-time visiting professor at the seminary.

Associates of the Marian Pact are asked to offer, as soon as possible, one Mass for the repose of the soul of Father McCarthy, and when convenient, to provide for the celebration of two other Masses.

May God welcome His faithful servant to his eternal home in heaven. May he rest in peace. Amen.

Published in The Cincinnati Enquirer on Jan. 7, 2018


Bernard T. Farrell, 66, of Park Hills, died at 1:30 a.m. Saturday at his home. He was a retired self-employed design engineer. He also retired in 1970 after 23 years with the Marine Corps, having served during the Korean War. He was named Marine of The Year in 1993 by the Cincinnati Montezuma. He was a member of St. Agnes Church in Ft. Wright, where he was a Christian minister. He formed the Kentucky Division of the Ancient Order of Hibernians in 1990 and was first state president from 1991-93. He was past president of the Ohio Division of the Ancient Order of Hibernians from 1981-83, received the Kevin Berry Award in 1984, grand marshall of the St. Patrick's Day Parade in 1985-1986. He studied genealogy and had made 10 trips to Ireland to learn more about his ancestors. Survivors include his wife, Dorothy Jones Farrell; a daughter, Linda Caudill of Delhi, Ohio; sons, Michael Farrell of Cincinnati, Patrick Farrell of Cleveland and Dan Farrell of Covington; his mother and stepfather, Cecilia and Peter Smith of Withamsville, Ohio; two grandchildren and two stepgrandchildren. Mass of Christian burial will be at 10 a.m. Wednesday at the church. Visitation will be from 5 to 9 p.m. Tuesday at Ronald B. Jones Funeral Home, Ludlow, with the Cincinnati Montezuma having a service at 7 p.m. and the Finian Ancient Order of Hibernians at 8 p.m. Burial will be in St. Stephen Cemetery, Ft. Thomas. 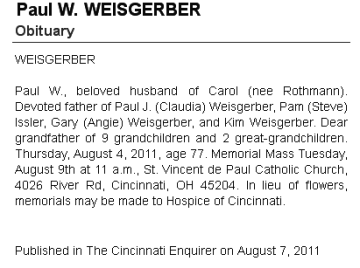 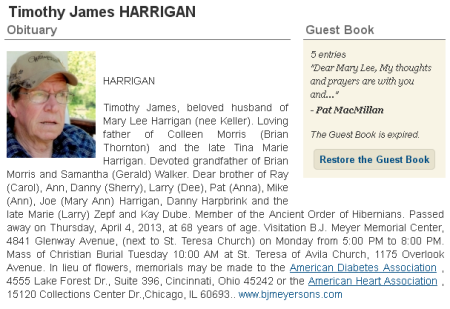 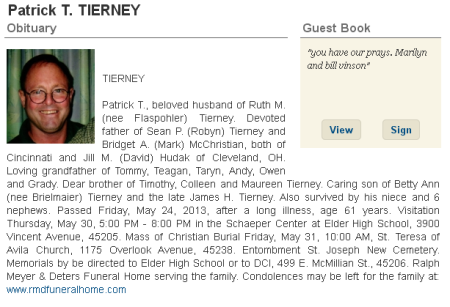 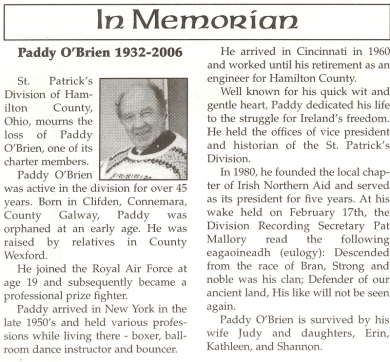 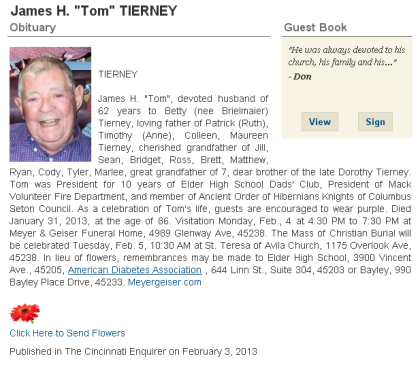 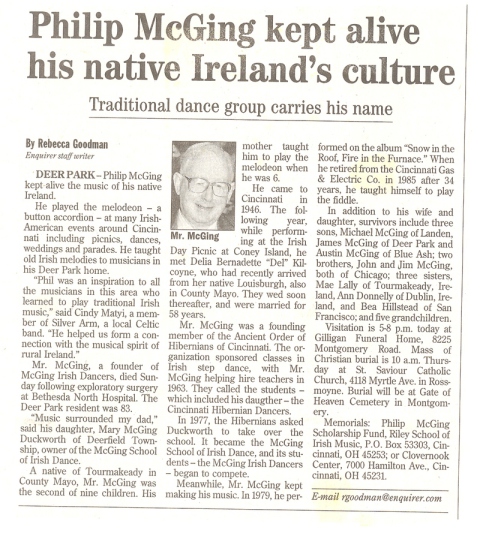 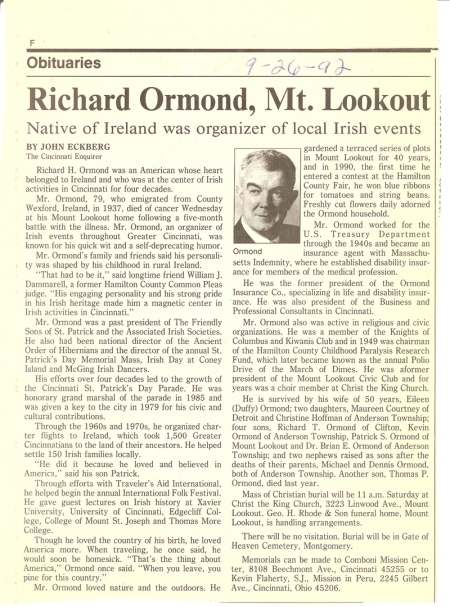 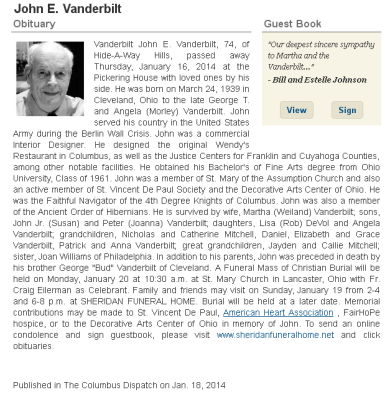 GRADY William James, 86, of Edgewood, KY, died suddenly on January 11th from injuries sustained in a traffic accident. He was a World War II veteran, serv ing in the 8th Army Airforce Division Intelligence/JAG He served in Belgium, France and England, It was while in England he met his future bride, Eileen Margaret Owens, a native of Birkenhead, England. He married while he was stationed overseas. She preceded him in death in 2001. He was a retired examiner and supervisor for The Federal Home Loan Bank Board. He was a councilman for The City of Edgewood from 1993-2006. He was a passionate member of city council and served on many communities including the History Committee. He was a longtime member of The Ancient Order of Hibernians, a men's Catholic cultural organization, and other Irish organizations. He was also a volunteer for CASA, as a children's advocate and also volunteered for many years for the George & Rose Steinford Toy Foundation. He was a member of St. Pius X Church in Edgewood from its inception. He was a 1937 graduate of Covington Catholic High School and attended the University of Cincinnati. He loved to travel, particularly to England and Ireland. He had a great interest in, and extensive knowledge of, local Kentucky and Irish history. He and Eileen founded the local chapter of the Transatlantic Brides and parents Association, a British heritage and travel society. He was passionate and vocal supporter for life at all stages and conditions. He was enamored with his family, in particular with his grandchildren. Survivors include: Maureen Grady Gerrein (Carl), Therese Grady Dolan (Kevin), John Grady (West Chester), (Maureen Stuber), Kathleen Grady Barker (Mike), William P. Grady (Donna Staub), Bridget Grady-Spears)Raymond), peter Grady and Seventeen grandchildren and three great-children. Foundation www.steinford.org, Covington Catholic Scholarship Fund, 491-2247. Visitation Sunday 2-7 P.M. @ Middendorf-Bullock F.H. , 917 Main St. Covington. Mass of Christian Burial Mon, Jan. 15, 10 A.M.at St Pius X Church, Edgewood. Interment St. Mary Cem. , Ft Mitchell.

DOWNING Patrick J. beloved husband of Karen Downing (nee Stadtlander), loving father of Brian (Angela) Downing and Debra (Wesley) Nichols, grandfather of Zachary and Hunter Nichols, brother of Michael Downing and the late Jack Downing, many nieces, nephews, cousins and friends. Wednesday, December 15, 2010, age 68. Patrick was the area Vice President for Local 4400 CWA and retired from Cincinnati Bell with 33 years of service. He was the executive coordinator and Grand Marshall of the St. Patrick's Day parade for the last 5 years. He was an active member of the Ancient Order of Hibernians. Visitation Friday 5-8 PM at the Vitt, Stermer & Anderson Funeral Home 4619 Delhi Rd. Funeral Mass Saturday 11 AM at St. Ignatius Loyola Church. Memorial contributions may be made to Hospice of Cincinnati. www. andersonfuneralhomes.com.
Published in The Cincinnati Enquirer on Dec.16, 2010